At the intersection of storytelling and art. 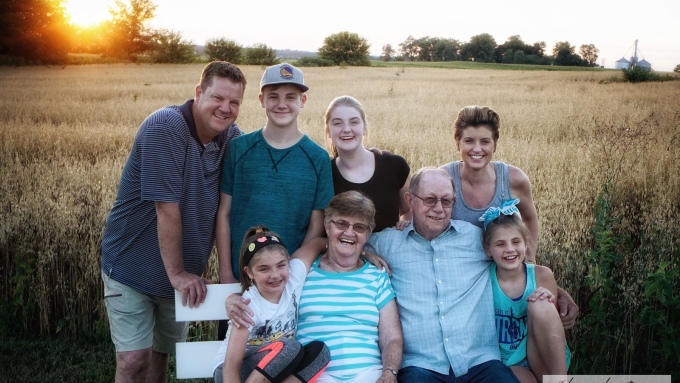 Quincy and I feel as though we have stepped into a new culture – a part of our country that we have only read about. It’s a culture molded by explorers, who paddled up the… More

It seems that whenever I go into a coffee shop, almost anywhere in America, there’s a small group of old guys (as in my age) sitting around a table for their morning chitchat. In La… More 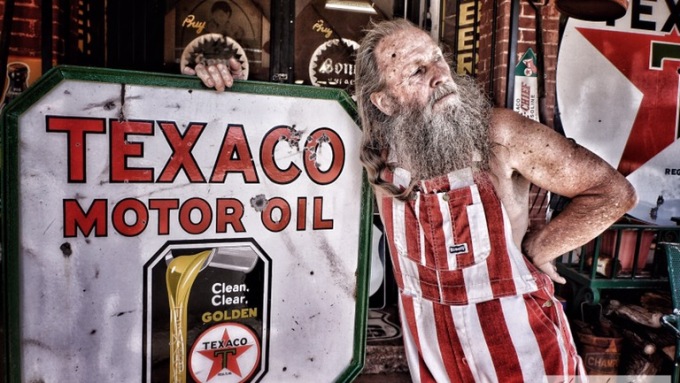 Erick, Oklahoma seems to be another Route 66 town fallen on hard times. It’s been a dot on the map since 1906. King Of The Road singer Roger Miller, grew up in Erick. Roger Miller… More

Recently, the roads that Quincy and I pedal are long, flat and straight. There’s very little traffic – one or two pickups pass us every hour. As the Texas sun heats up the land, the steam rises from the fields around us. The humidity builds. Stop for a moment, and we are dripping wet. Wheat is a favorite crop here. Huge wind turbines tower over the wheat fields and turn with the wind, slowly, deliberately, churning the thick air. Their blades are about 200 feet long, gracefully angled resembling giant propellers on an airplane, mounted on a pole 400 feet high. Texas produces the most wind power of any U.S. state. Wind power accounted for about 12% of the electricity generated in Texas during 2015. I wish they would turn toward us and spin faster like giant house fans, to cool us 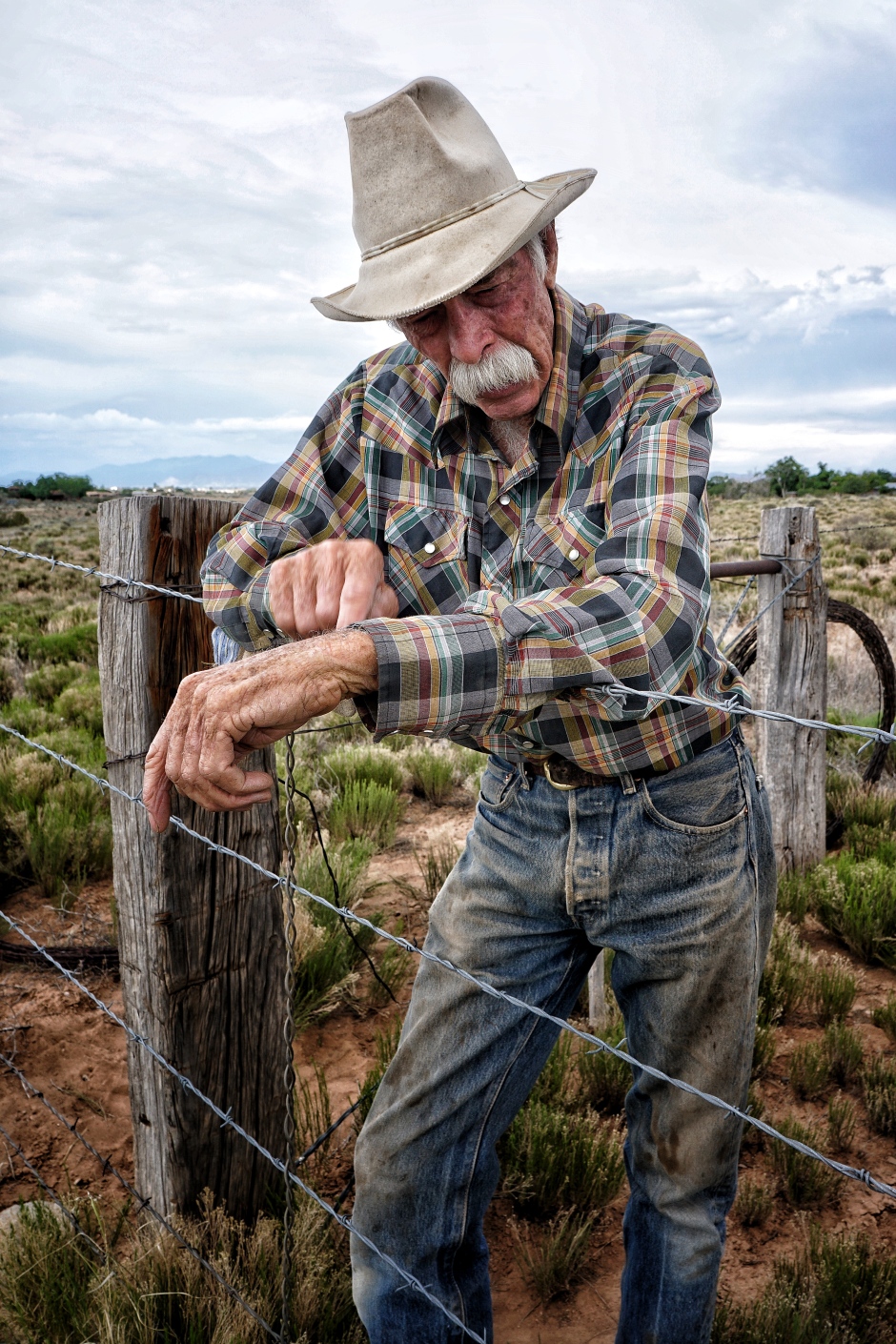 My favorite thing about bicycling across America is meeting folks like Archie West. My son, Quincy, pointed him out as we pedaled toward Santa Fe. Mr. West was repairing a part of a fence along the edge of his ranch. Carrying a coil of barbed-wire, he moved down the line, looking for breaks. Watching him, I sensed he was more than just an old cowboy. The way he moved, the way he took off his tan hat and wiped his brow, the way he worked with his hands – told me he’d been with this land his entire life.

I rolled up on my loaded bicycle, almost as if I was on my own horse and introduced myself. Soon, Archie was leaning on a fence post that was as old and weathered as he was – with the grace and pose of a Hollywood cowboy – his elbow at an angle on the post, his hip in the opposite direction, his thumb in his jean pocket – telling me the history of his family, his land, and how his dad had settled here from Oklahoma just before the Dust Bowl era. “This land is too dry to plant any crops. The only thing you can raise here is cattle.”

A black-and-blue thunderstorm circled behind us, unsettling the high desert with strong gusts. Mr. West dug into the dry earth with the side of his cowboy boot and pushed it aside, telling us about the big rain that had hit last night. “It’s never enough,” he said. “I hope we get more.”

I told Archie about our bicycle trip up Route 66. His brow lifted. He adjusted his pose and asked many of the usual questions people ask about our trip. I told him about starting in Santa Monica and about how many miles we tried to do in a day. Then I told him, “The best part about doing this bike trip is doing it with my son,”

Archie understood the deeper meaning of what I was saying, smiled and shot back, “My son moved back on the ranch. I love working with my boy.”

Soon it would be getting dark. Quincy and I waved good-bye and rolled down the windy road, pedaling side-by-side. The dark clouds moved along the distant mountains. I turned to my boy and reminded him, “son, you could take all of the University classes you can find and you’ll never have the conversation we just experienced.”

Quincy and I were fried – way overcooked from a long day pedaling through the desert. We wheeled into a gas station connivence store for a dinner of donuts and chocolate milk. The owner told us that a few miles up the road was a place that had a few trailers. “He charges 10 bucks. Just look for the A-A-Frame building on the left.”

We pushed on. The wind blew. The sun was setting. We rolled over more miles of desert, knowing that a 10 buck trailer was a lot better than a night in a wind-rattled tent, surrounded by grit and snakes.

Six miles later we thought we found home. The A-Frame building was closed and locked. We knocked on the door, hoping someone would let us in. Behind the A-Frame was a meandering row of trailers, rocking in the dust. A freight train rattled across the dessert in the distance, blowing its horn. I wandered among the trailers, looking for signs of life, keeping an eye ahead of my shoes, scanning the dirt for rattlers.

A door popped open. A grey bearded man stood in the doorway and gave me a long look-over. He carefully held on to a railing and hobbled down a few trailer steps to shake hands.

Fast forward a few minutes and a string of questions, in a mist of beer breath, Charles told me the owners were gone for the day. We chatted a bit longer.

Charles had a handsome, chiseled face, trim, gray beard and a tight, rubber banded pony tail. He smiled and revealed several missing front teeth. My first thought was that they were lost in a barroom brawl or during a face-plant fall in the middle of a blackout.

I could tell he was weighing options, considering a plan to help us out. “The only place for you to stay would be in my trailer. In fact, I’ll give you two my bed and I’ll sleep in my recliner.”

Quincy and I glanced at each other with a look of, “should we do this?”

We lifted our bikes up into the trailer and maneuvered them into a cramped kitchen space that separated the bedroom from his sitting room. On the counter was a pile of tobacco and a hand-rolled cigarette.

“Look at this view I’ve got,” pointing through the side window. “I told my brother to come visit. I told him all about the animals I see out my window. It’s the best view in the world! I told him I’d even give him my bed. He never came.”

Charles showed us the tiny bathroom. “Use the shower but be sure to put the plug back into the drain when you’re finished. It empties out onto the sand and the critters like to crawl in.”

Then he showed us the bedroom. A double mattress took up most of the room. He reached down next to the bed to retrieve his 12 gauge shotgun and several shells. “I’ll take this with me.”

A lot of folks who live out here – some call them desert rats – want to be forgotten. They are getting old. Social Security gives them just enough to manage. They like to be alone. Charles was no exception. Three marriages, 2 adult daughters who don’t talk to him, and a mountain of bills offered little to look forward to. A few years ago he broke his right ankle. It didn’t heal correctly. Walking on it is painful. After the accident, finding work was difficult. Looking down, he offered, “Do you think my daughters stepped up to help? Nope. Nothing. Not a damn thing.”

Finally his brother handed him a 4-grand wad of cash and said, “go start over.” Charles sifted through a lifetime of possessions and loaded the remnants into his small car. He left Indiana and headed west.

Quincy and I were awake a 6 am, our sunburned legs still stiff and not quite ready to get back on our bikes and start pedaling. Charles was sitting in the recliner, wrapped in a blue bathrobe, smoking a cig and sipping coffee. He took a drag and looked up, smiling, revealing the gap of missing teeth. “I’d offer you some coffee, but I only have one cup.”

My son and I thanked him for his kind hospitality. We’d grown to like Charles. This was always the best part of cycling through America – being befriended by strangers. Charles asked if we couldn’t hang out for a while longer. It was clear by his tone that he didn’t want us to go.

We carefully backed our bikes out the door and down the steps onto the dessert floor. Charles stood in the doorway to watch us leave. Then he closed the door and returned to his recliner and his favorite pastime: looking out through the trailer window, into the dessert. He watched for animals and birds that might search the parched land for nourishment. He scanned the horizon for the occasional storm that may roll in. His metal box – his home – warmed by the sun, still rocking in the wind. A hawk in the distant blue sky circled. With his shotgun waiting on the floor, Charles took a sip from his only cup, wishing his daughters, or even his brother, would give him a call. “I gather trash. I also gather intel on the military. You’ve got the Army training on my left and the Marines on my right. If they’re gonna fight Russia, they’d better start training in the snow.”

Many say that Aretha Franklin’s song, Respect is the best R&B song ever. Isn’t that what most of us want, just a little respect? Isn’t that why many of us are on Face Book?
Bicycling up Route 66, has many highlights. One is when someone pulls alongside and rolls down their window to shout, “Right-on! Where you go’n?” ….. “Chicago?! On those bikes? Wow! I wish I could do that!”
Yesterday at a IHop breakfast, a large group touring on Harleys heard our story and jumped up, all wanting to take our photos. Later there was a guy at a donut shop who walked up to tell us, “I spotted you guys across the street on your bicycles. You had ADVENTURE written all over you.” 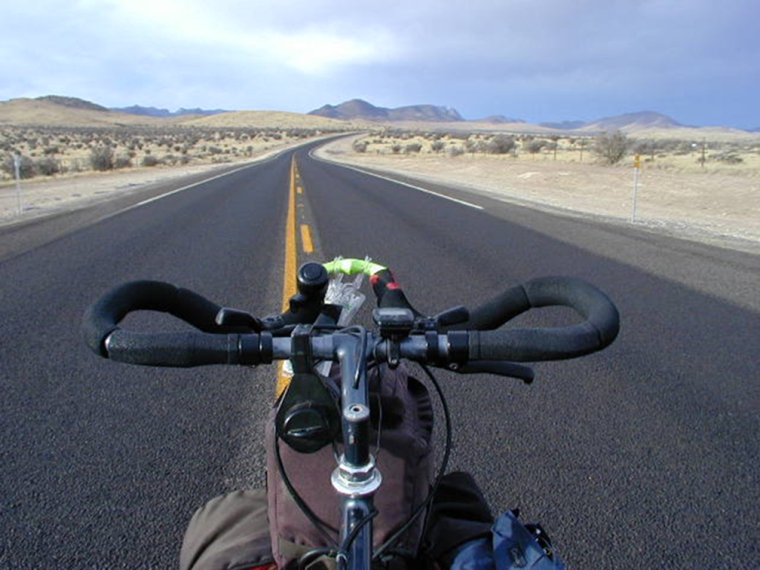 Columbus Was Wrong – The World Is Flat

Have you ever wanted to bicycle across America? Do you think you might be too old? Think again.

On a hot August day in 1990, Dennis deBey was kind enough to accept my invitation to photograph him in my studio. I had asked him to bring along a few props – tools of his trade. He parked his truck out back and began dragging in welding torches, acetylene tanks, hoses, hammers and an anvil that was so heavy I feared it might fall through my floor.

Before I met Mario Gonzalez, I knew very little about bees. After visiting with Mario in the southern Oregon sunshine, I now have a new appreciation – not only for bees, but for the love one bee keeper brings to his craft. I know you’ll enjoy this story – especially when you get to the part about the Russians! 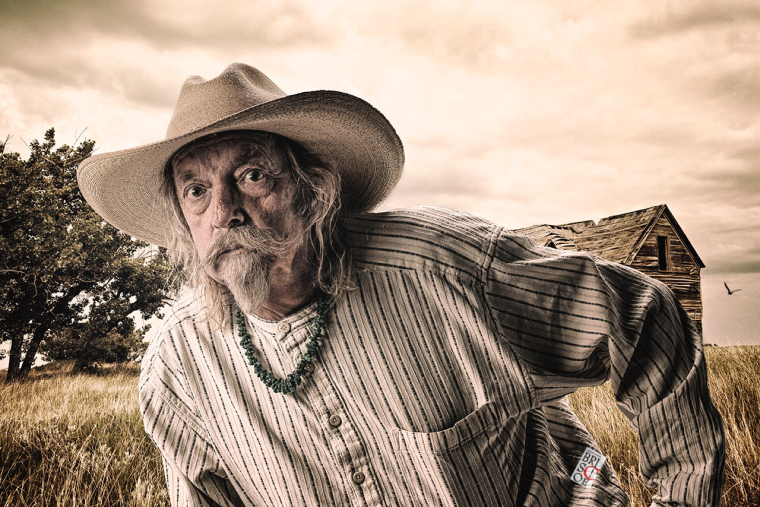 Near the top of the Siskiyou Mountains in southern Oregon, there’s a cowboy named Terry, who lives alone with his dog, Maggie.

Read the rest of the story here…The Cowboy From England

The Art of Surfing